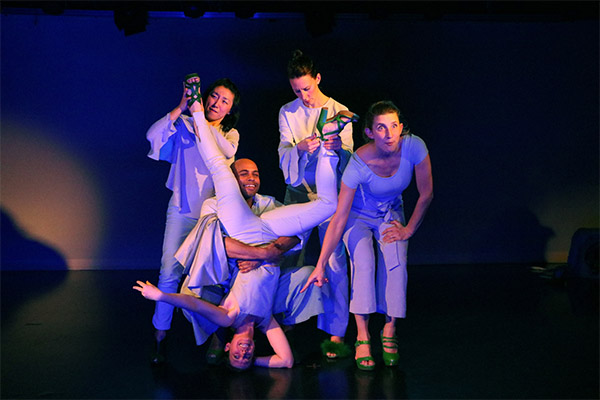 By Lauren Warnecke August 3, 2019 Live From The Festival
No Comments

Note: Throughout my time as scholar in residence, I’ve had the pleasure of working with Phoebe Ballard, who in addition to participating in the Professional Training Program and working as a box office intern for the festival, has been spending what little free time she has developing her dance writing tool kit. Here, Phoebe offers her reflections on Lida Winfield’s “Imaginary,” presented July 26 and 27 at the Bates Dance Festival – Lauren Warnecke

Lida Winfield’s “Imaginary” was presented as part of Bates Dance Festival’s 2019 Performance Series, situating audiences on three sides of Gannett Theater. It was spiraling, it was colorful, it was wild, taking us on a journey animated by six magnificently potent performers, live music, mismatched green high heels, and emerald green tutus. A set covered in fabric reminded me of a structure you would see in a cozy reading nook in the children’s section of Barnes & Noble and transformed into a table, a mountain, and a wardrobe at various times throughout the piece.

Immediately it was like we had been dropped into a carnival for adults. The lights cast purple and green hues on the performers as they began to address the room and the audience through gestures, facial animations, and loping passes on the diagonal, demarcating us from them. I couldn’t see every minute detail, but I could feel it. I could feel the buzz of the room, which lived for the entirety of the piece, supporting its grandeur, eccentricity, and seriousness.

Whimsical absurdity became the through line. Laurel Jenkins was electric, pacing the space with loud and assured steps, sporting a large emerald green trench coat with shoulder pads. With convincing bravado, she launched into a performative monologue repeating, “Step right up, step right up,” as if turning into a game show host listing all the prizes that could be yours. Step right up, step right up.

Winfield and Maree ReMalia embarked on a duet with balloons strapped to their chests, communicating in staccato gestures, facial expressions, and gibberish babbles against fitful bursts of movement. Ellen Smith Ahern treated us to a scoping improvisation, playing with the audience as she traversed caveman-like states and moments of elongated beauty, all the while interspersing deadpan stares at the audience whenever they could no longer stifle their chuckles. Joseph Hall crafted a headdress out of a tutu, prompting musician and performer Matthew Evan Taylor to emerge from the corner while singing opera, prompting an operatic battle between Jenkins, Ahern, Hall and Taylor to break out amidst animal-like running, sliding, and falling on the diagonal. Choices like these, I could have watched forever.

Some of the most salientmoments came in the spaces where the lunacysimmered, allowing audiences to approach this perceived seriousness with the knowledge and memory of the caricatures and characters the performers had so fluidly inhabited just moments before.

This sense first arose when the five performers settled centerstage, eyes closed, carefully shifting through their feet like treading through sand with hands on each other’s shoulders. ReMalia stood at the helm, microphone in hand, saying, “You may or may not imagine…” followed by a statement of truth.

You may or may not imagine. What a way to frame a truth, to think about perception, to think about how our perception is wholly imaginary. Just moments before, we saw Remalia transform into a birdlike animation, wearing a tutu, balloons strapped to her chest. That was her, and this is her. Both are real, one is not imaginary.

From this truth telling, a series of physical tableaus erupted. With each tableau came the spoken frame of “This is.” “This is my childhood bedroom,” one said, as the performers stood, arms outstretched, mouths open wide, creating a cavernous hallway lined with their arms, which now served as branch-like objects.

Between each “This is,” they traversed the space: downstage, upstage, zigzagging in between. It became more staccato, more layered, each performer shouting with both voice and body, much less shape driven. “This is a dog getting hit by a car,” said another, as one by one they descended from the upstage corner, writhing their body like getting hit by lightning as they arrived centerstage. “This is church.” “This is an all-you-can-eat midnight buffet on a cruise ship.”

Eventually they knotted themselves in the corner. The tableaus shifted into solos, patterning and gridding through the space, moving en masse as each performer made their own statement of “This is.” Layered one over the other, it became more solitary, independent. It went on, immediately prompting a mood change:

“This is an ICE detention center.”
“This is the Mueller Report.”
“This is hashtag Me Too.”

This, I believe, is the root of what Winfield was getting at. Everyone has an imaginary lens from which they view things. Everyone has a tendency to believe their “imaginary” as truth.

The imaginary isn’t poetic. This dance wasn’t. It was loud and in your face, but in exactly the way I wanted it to be. There were so many moments I wanted to keep reliving. But each moment, in the context of the piece, lasted for the exact right amount of time. There were morsels of these larger characters, these larger animations of self, these performative indulgences, these magnificent moments of absurdity and righteous silliness, that left me wholly satisfied but not overly full. It left me thinking more cheerfully, more seriously, more wholly about the way we see the world we inhabit and the people we share it with.

The piece ended with a chorus of truths, similar to the monologue of truths recited by ReMalia earlier. Ranging from funny, to serious, back to funny again, we were reminded the importance of not taking ourselves too seriously.