The roughly 150 students in the Professional Training Program include dancers from all backgrounds and walks of life. While some of these students are here for the first time, many are drawn back year after year. Leigh Lotocki attended BDF for the first time in 2008 and after a long break came back this summer for another dose of this inclusive dancing community. 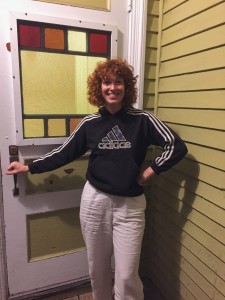 BDF: Can you tell me a little bit about your dance background?

LL: I did ballet almost exclusively growing up, and then when I went to college I switched to modern. It seemed kind of like a natural progression but it was a big shift for me – I didn’t really know a ton about contemporary movement, but I had the sense that if I chose contemporary work or modern dance or even more experimental work I’d be dancing a lot longer than if I pursued ballet.

BDF: How did you hear about the Bates Dance Festival?

LL: I went to Ohio State University and I heard about BDF from everyone there. A bunch of my classmates had already been here and a lot of the BDF staff today were working at OSU or were there as grad students. Carrie Cox (Festival Production Manager) was our Production Manager at school, so she pulled me in. I ended up with a production work-study position my first year here in 2008. I had a blast — I was really busy, I had a full schedule of classes and I was working, but I got to see all of the shows from backstage which was a really interesting way to experience the Festival for the first time. I felt then a bit like how I feel now which is that I was meeting a lot of new people and also surrounded by some familiar faces, and it was a great experience. Bates has been a really comfortable network of people that both support and challenge each other, and it’s always really felt like a family atmosphere. I really like that BDF doesn’t have a competitive edge – it’s just not there, and any sense of competition is just from people seeing each other and saying “oh I can do that” or “now that I’ve seen someone do this I’m really inspired to do this other thing,” etc. That’s something I’ve always appreciated about Bates as opposed to other dance festivals.

BDF: What classes are you taking and what have you learned from them?

LL: I’m taking Paul Matteson’s technique (Modern V). I actually took his technique the first time I came as well and I just knew there was a lot there to work with and I had liked that class a lot. It was a cool realization to come back to it and remember how different my body was the first time. I’m also taking Pilates which again is something I’m kind of coming back to from old areas of training that I’ve since kind of moved away from. I’ve been really craving a mat practice I can do at home, so Pilates has a lot of utility for me in my life as a dancer in New York, not really having a lot of space in my apartment I can noodle around in or do a warm up in. In the afternoons I’m taking Doug Gillespie’s technique (Modern IV) and Kate Weare repertory. Doug’s class is all about physicality and finding clarity in your movement and a sense of movement initiation. I feel like I’m really finding power in my movement. Kate Weare’s rep class has been awesome and I’m learning a lot about her work with a great group. I’m really pleased with my classes.

BDF: What’s next for you in the dance world?

LL: I’m living in Brooklyn. I moved there a year and a half ago from Columbus, OH to start a new chapter. I make dances and I also still really enjoy performing for people. I’ve been interning at Center for Performance Research which has been a great experience with a small tight knit team with similar values to this place and a supportive environment focused around dance and art making. I moved to New York in part because I was really craving a community where I could have more dancers’ eyes on my work, and I wanted that kind of electric sense of inspiration from being among lots of dancers.

BDF: Why did you choose to come back to BDF this summer?

LL: For kind of similar reasons as to why I moved to NY. I knew this was a place where I have friends and I would make friends and more importantly it was a time that I knew I could really focus inwardly on my dancing and reinvigorate my physical practice. Anyone especially who’s in NY knows that dancing can get diluted by other things we have to take care of, especially for people doing contract based work. When you’re a freelance artist you really have to carve out time for your dance process and technique. I wanted to get a kick-start this summer in a supportive environment with a lot of good friends and have a really great time.

BDF: Can you share a stand out moment from your time at the Festival so far?

LL: I think what stands out is mostly the feeling that everyone at the Festival is really present, both on a day when they feel really great and are loving the class and on a day when they’re injured or frustrated. So many little moments stand out here in a way they don’t in my “regular life” – I really get more out of each day here at BDF.

This post was written by Chava Lansky. Chava is the BDF Social Media intern for the 2016 summer.