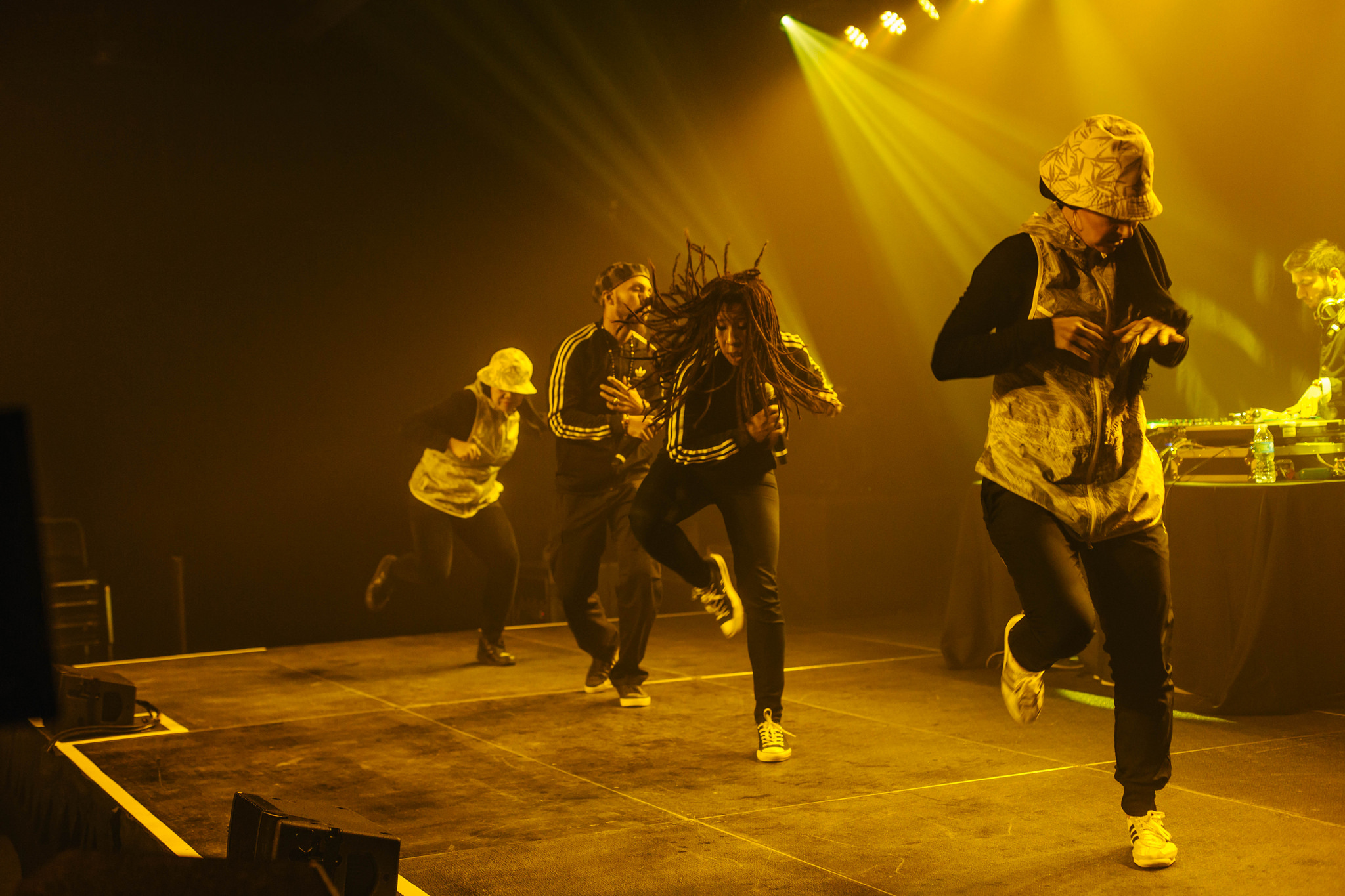 Live from the festival: A party as performance and other thoughts on audience participation

By Lauren WarneckeJuly 25, 2019Live From The Festival
No Comments

The Bates Dance Festival’s 37th presenting series officially launched July 12, with a hip-hop performance in the Shaeffer Theatre combining music and dance by The Reminders and MaMa².

MaMa², comprised of Chicago’s Amirah Sackett (“Suga Mama”) and Detroiter Mary Mar (“BGirl Ma-Ma”), offered three short dances injected into more than 90-minutes of goodness by The Reminders, a music duo hailing from Colorado. The husband and wife team – Big Samir and Aja Black – alternate between rap and hip-hop with pinches of funk and soul sprinkled in, while Sackett offered two quintessential examples of her signature style of popping-and-locking. Mar’s solo is a brief, but wide-ranging journey telling the story of her family, who fled the Cambodian genocide to ultimately settle in Michigan, where she was born and became a B-girl.

The second and final performance of this festival kick-off was July 14, with Bates Dance Festival events resuming tonight through August 4 in and around campus.

MaMa2’s work blends old school hip-hop with each woman’s Muslim faith, which produces a rich amalgamation of layers in their performances. But amidst the seriousness of the 2019 Bates Dance Festival’s overarching themes surrounding identity, culture, and the biases and assumptions germane to contemporary dance, they essentially threw a big party to kick off the season, backed by DJ Man-O-Wax fiercely spinning vinyl upstage.

What the back half of the audience soon came to find out, is that this first public event of the Bates Dance Festival (BDF) was, for the other half of the crowd, the end of their time in Lewiston, Maine. The Reminders, MaMa2and DJ Man-O-Wax were the penultimate event for youth enrolled in the Young Dancers Workshop (YDW), a three-week, pre-professional training program taking place each summer in conjunction with the performance season.

This year, the BDF schedule has been reorganized, condensing the presenting series over three weekends to overlap with the Professional Training Program (PTP), a series of intensives for college-aged and professional dancers. Hours before The Reminders hit the stage, YDW participants gave an informal showing for family and friends, and the night before, Sackett and her aforementioned friends led a hip-hop workshop and dance party as part of the festival’s Concerts on the Quad series (relocated, like the first BDF Beer Garden after Friday night’s show, to a covered terrace near the Bates College library due to rain).

The casual, outdoor venue was a wholly more natural atmosphere for such a thing, if you ask me, but that didn’t stop Friday’s guests from grooving to the infectiously joyful noise of The Reminders, who, at intervals, brought YDW dancers and other audience members, including an infant, a toddler and two other adorable kids, up on stage to jam with them.

From our seats, we became part of the show: standing up, shaking our hips, waving hands in the air, swaying, snapping, clapping and reciting words with them – like a rock concert with a bit more direction.

I don’t know why, but when I’m told to stand up and shake my hips, I almost always feel apprehensive. I, like a lot of people, I’m sure, struggle to abandon physical defenses and “let go.” In so doing, my actions probably counterintuitively draw more attention to me than if I were to join in – but an ear-to-ear smile and tiny bobbing of my knees to the beat of the song is enough to get by with, right?

I think people might interpret my hesitation as an unfortunate quality – something to be pitied, even – perhaps related to some level of insecurity, or a crippling lack of awareness or inhibition with my body, or an inability to really embrace what’s unfolding on stage.

That may be true for some, but for me, that’s not it at all.

Many choreographers and dancers talk of their desire to help “normal” people become “embodied,” as if to dance is to exist on some higher plane of kinesthetic awareness, self-knowledge or confidence (for some, it is; for some, it’s not). Artists who create immersive environments which require or encourage participation might view conventional theater spaces as relegating the audience a passive, uninvolved, detached entity, non-essential to the performance itself.

Is it fair to equate the above esoteric thought bubble to a couple of great musicians asking me to wave my hands in the air?

Heck, no. And to be clear, I personally felt safe and totally comfortable during this performance, and had a good time. (Furthermore, The Reminders shifted their approach when a comparatively subdued audience of Lewistonians and incoming PTP participants watching Sunday’s show were very clearly not going to be as exuberant as Friday’s audience).

But participation is something I’ve been thinking about within a larger discussion about audience expectations and consent, and it’s a theme that will arise throughout BDF this season.

It becomes even more complicated as festival directors and presenters realize that their audiences may not share the same values as their organizations. At least one, Pamela Tatge at Jacob’s Pillow, has publicly acknowledged this, which raises questions about what you can assume about your audience when you’ve evolved and they haven’t, and how much artists can therefore pressure their audiences into being vulnerable.

This is unfair, I suppose, when stadium tours and sports events aren’t given the same mandate. Maybe they should be. It’s impossible for the person who runs the “kiss cam” at hockey games to know whether they’re zooming in on an actual couple, or if cutting to commercial with a person wolfing down a hot dog at a ball game is how that spectator wants to be represented on TV. I’m not suggesting here that we eliminate or be offended by kiss cams or showing people eating hot dogs, or even inviting audience members on stage. Rather, I think I’m pointing out that permission is a thing, and this is a trickier subject that some artists might think.

As a not-so-serious example, I’ve watched Ohad Naharin’s “Minus 16” about a dozen times, mainly performed by Hubbard Street Dance Chicago. One of those times was last summer in Mexico City at the Danzatlan Festival, where a language barrier contributed to the most memorable viewing to-date. In the famous “Dean Martin” section, when the whole company falls down and leaves a lone audience member standing at center-center, she followed visual cues from her partner and laid down, spread-eagle, with the rest of the dancers.

Now, a more serious example: Watching Gauthier Dance perform the same piece a few months ago at the Harris Theater, one of the volunteers tripped and face-planted, belly flopping on the stage. She was fine (and an amazingly good sport), but there are so many what-ifs that went on in my brain when that happened. What if she’d been hurt? Dance doesn’t have “injury time-outs;” must the show go on if she’d busted her knee or blacked out? What does the process for picking volunteers look like? Could those volunteers be asked ahead of time, before the show? Would that create more inclusivity, allowing people with disabilities, people who’d love to do it with a little mental preparation, or even just the people in the middle of a row, to be considered? Picking “plants” from the audience – like, for example, what happens in Cirque du Soleil’s “O” when they strap an “audience member” to a harness and launch him 125 feet above the stage – would be inherently safer and more controlled in every regard. But it’s also contrived, quashing the beautiful variability and spontaneity that results from audience members (and the performers!) not exactly knowing what will happen – even when you’ve seen it a dozen times.

In an informal showing last week in the Shaeffer Theatre, the audience was given more than one trigger warning about nudity in the second of a trio of works in progress. By contrast, the third piece, during which the performers strongly recommended sitting in a circle on stage (though there was not enough room for everyone), showed what I considered to be images more triggering than naked bodies, and didn’t offer any disclaimers in advance. I’m not sure what the right approach is, but it’s important to consider the optics.

The most negative experience I’ve had at a dance show was within a supposedly inclusive environment. It was a burlesque cabaret which touts platitudes of queer positivity, body positivity and sex positivity, but made very clear that those who couldn’t let go of personal inhibitions toward participation were not welcome. I left at intermission.

Large, institutional dance companies and venues are, in increasing numbers, offering relaxed or sensory-friendly performances, creating an inclusive environment for individuals and families who are not able to, or are uncomfortable with remaining still and quiet in the dark for several hours. The house lights are dimmed, there’s no “shushing” allowed, and people are permitted to move around or go in and out of the theater as needed. Many experimental artists whose work hinges on participation do not seem to be picking up the other side of the issue by accepting that some audience members might need, or simply prefer to sit and watch. This is obviously a generalization; in my city alone, I can immediately offer Dropshift Dance, Zephyr Dance and Khecari as exceptions – three companies who play with audience interaction and almost always take meticulous care of the people in the room.

Art does not exist in a vacuum. Artists should seek to embrace everyone, or at least, manage the audience’s expectations. I don’t do conga lines. I don’t do mosh pits. I don’t want to wave my hands in the air, and I don’t enjoy getting up on stage during someone else’s performance. Nobody has the right to question this or ask why.

But I also love watching others who, with no hesitation, join in, and it doesn’t make me feel awkward to not be one of them. Seeing those YDW dancers oozing with joy, confidence and kinship for each other, dancing in the aisles and on stage as The Reminders’ lyrics drooled with positivity and love, I couldn’t help but stand up, smile and bob my knees to the beat, just a little.

I’m grateful to the Bates Dance Festival for creating spaces – digital and physical – for audience members and others to engage, not only with the work happening on stage but with these broader topics, too. I hope you will join me at one of the remaining Inside Dance events, in addition to all the festival performances, to discuss and digest the artists and subjects presented at BDF.