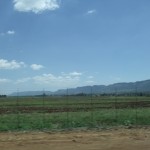 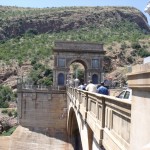 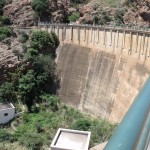 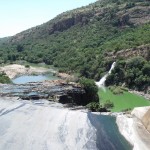 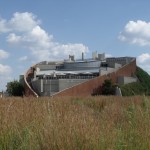 This is our day off from the festival as no performances are scheduled.  We take the opportunity to get out of the city and head to the Magaliesberg hills, an area northwest of Joburg about one hour’s drive. Our driver Lawrence, whose company is providing transport for all the festival participants, is a knowledgeable guide. Magaliesberg is bordered on both the north and south by small mountain ranges with a gorgeous valley in between. The Crocodile River runs through the region. A dam at the east end creates a large lake. The landscape is extraordinarily beautiful which has made it a big tourist destination.  In earlier times the region was renowned for its game but trigger-happy trophy hunters have, for the most part, shot out the game. The Afrikaners in particular, have developed many high-end lodges and game reserves.  The region of rolling hills and amazing vistas is now home to many working farms.

Lawrence takes us on some back roads to visit the dam and then we are off to Maropeng – the Cradle of Humankind. Maropeng covers 47,000 hectares of mostly privately owned land. It comprises a strip of a dozen dolomitic limestone caves containing the fossilized remains of ancient forms of animals, plants and most importantly, hominids. Here the earliest human skulls have been excavated. Maropeng includes a museum built five years ago, sited on a beautiful high piece of land with views in all directions. This is a very special place.  The buildings are thoughtfully placed in the landscape. The exhibits are well thought out and executed to appeal to people of all ages. Our guide has worked there since before it opened and his name is listed on the plaque by the door.  The museum presents a decidedly enlightened point of view about the origins and evolution of our human species and the future we are facing.

While I would really have liked to take a hike in the hills instead of just admiring them from the car window it is nice to get out into the big open spaces.