Another day of torrential downpours and wild thunder and lightning keeps the atmosphere exciting and cool..  I am awakened each morning near 5am by the complex and melodic song of two birds calling to each other…wake up, wake up, the day is coming! After trying for a couple more hours of much needed but fitful sleep I rise for a glorious hot shower with a little yoga thrown in. We are sitting way too much, did I mention that already? 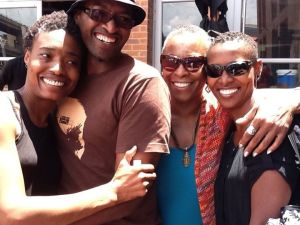 This morning we are off to a breakfast meeting with about 40 theater and dance artists at the Market Theatre organized by the director, Malcolm Purkey. There is a bit of confusion at the start as the restaurant we are supposed to gather in is closed. Our empty stomachs growl and coffee is needed by all. We finally get situated across the park in a Sophiatown café and much socializing ensues.  It’s a wonderful opportunity to meet a range of folks involved in the arts. I chat with a retired cultural attaché who serves on the Market Theatre board, and with Michelle Constant who direct BASA (Business and the Arts South Africa). I mention the informal network the affiliate artists are trying to create and their dire need for administration support to form some basic infrastructure. She seems enthusiastic and quickly formulates an idea for how to fund a one-year position to assist them. I lure Greg over to join us and am excited to think something might happen to help their nascent group develop.  Apparently the artists met with BASA last year but nothing came of it. Well one must keep at it and I hope they will.

In the afternoon Neli takes myself, Cathy and Mamela out to Sandton, a ritzy northern suburb of high end shopping malls, the US Embassy, galleries, hotels, etc. We visit the original Goodman Gallery, one to the most established galleries in Joburg where there is a show of work by women including two stunning photographs of Neli’s piece, “Uncles and Angels”. The curator, a smart young woman, joins us for coffee and fills us in on recent shows and activities at the gallery. Neli seems to be quite connected to the visual arts scene. The Goodman is a beautiful space –all white everywhere with nice library.

We move on to a swanky little café for some lunch and enlightening conversation about our individual family histories. We are relishing the chance to get to know one another better and go deeper into our understanding of how we have become who we are. Without sharing any personal details I will just say that the potential for violence is omnipresent in the lives of many people on this continent — especially women. As Americans we are extraordinarily fortunate to live in relative safety and we should not take it for granted for a moment.  For us the violence and abuse is covert if it exists whereas here it is very overt. Listening to stories of the harsh realities and threats that must be endured here adds a powerful dimension and rational for the work we are seeing. These issues must be exposed and what better way than through performance.

Back at the Market we attend performances by Alfred Hinkel and Robin Orlin, both dance icons in South Africa. Alfred’s piece “Dansmettieduiwels”  (an unholy mass) is based on the theme of the stereotypical Roman Catholic priest as a child sexual predator. The piece was created in response to the suicide of a young man who grew up in one of the local missions schools outside of Capetown and was becoming a priest. Set to the sacred music of Johann Sebastian Bach, mostly his Mass in B minor, and with a backdrop of iconography from the Vatican and Roman Catholic Church, the ugly story unfolds through the demented lens of this ‘unholy’ worldview. We see Adam and Eve, Cupid/Eros the erotic angel, the commanding and masculine priest/overlord, and a boy who is ultimately and quite brutally raped.  Sexually suggestive acts course through the work. The dancing is spectacular and very physical.

Alfred has trained these dancers in his technique which he has been developing for more than 30 years, first at JazzArts, the company he directed in Capetown, and now on his own. He is teaching a workshop for about 20 young dance artists in conjunction with Dance Umbrella. One of them is Lucky Kele who has spent two summers at BDF.  From Lucky’s description the approach to training and creation is based on improvisation and internal sensing — working from the inside out. One can see watching the dancing that there is a strong technical foundation but also a level of embodiment and commitment to the characters. The boy is particularly astonishing, as he looks all of 13 and has only studied with Alfred for 5 months, we find out later. In fact, he is 17 but still he does an amazing job of holding his own among the more accomplished and older dancers.

Once again in this work we are confronted with a harsh reality of life here – the sexual abuse of children that is overlooked and left unprosecuted in most instances. Catholic missions dot the countryside every 200 kilometer or so. While pedophilia among priests has been a major story in the US and the British Isles, clearly it is going on everywhere and must be exposed and addressed worldwide.

From this hideous and beautifully wrought work we go directly to experience Robin Orlin’s signature work, “Daddy, I’ve Seen This Piece Six Times Before And I Still Don’t Know Why They’re Hurting Each Other”. From the sublime to the ridiculous, Robin’s work features the originally cast of Neli Xaba, Gerard Bester, Toni Morkel and others in a completely over the top, totally whacky, wildly manic slapstick performance event that is absurd, hilariously and exhausting. We are crowded into a small room with a giant raised staged that takes up most of the space. The audience stands around the perimeter and is often cast into the action.  The opening image is of a very tall Neli (standing on stool it turns out) center stage in a long red velvet evening gown putting on the airs of the ultimate diva and bossing everyone around. Actor/director Gerard serves as master of ceremonies hopelessly attempting to corral the performers into behaving. In the ensuing hour an a half we are treated to leopard undies, dancing plastic windup duckies, a frenetic African dance routine by 16 youngsters, a stage methodically covered with hundreds red plates, and a synchronized dance with platters (a la 60’s variety TV choreography) that is shot from above and viewed on four monitors hung in each corner of the room…need I go on. When a 300 lbs woman from the audience is brought on stage to do a romantic duet with Gerard to some sappy love song, and ends up astride him doing the bump and grind, the whole audience loses it in howling laughter.

This nutty piece has toured the world, apparently with wild success. It helped launch Neli’s career in Europe and was considered worthy of a revival this year at the Umbrella. In fact, it sold out so quickly they added show this afternoon. I guess everyone needs a good laugh now and then.