On Saturday evening we returned to see Neli Xaba and Gregory Maqoma’s pieces for a second time. I always prefer to watch work several times over to better dig into the layers of meaning and material. Just like watching a film I am so taken with the surface and the action the first time around that I often need another look to take in all that is offered. I also so appreciate the living quality of performance and the subtle (and not so subtle) changes that keep the work evolving and alive in the moment. I was able to confirm and clarify my impressions to share with my colleagues and to inform my conversations with the artists that I hope to have in the coming days. 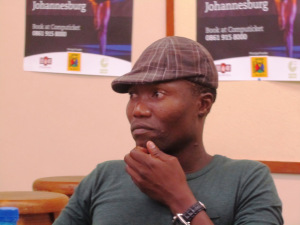 Having an opportunity to spend time with Neli and Greg, along with the many other artists who are here with whom we have history,  is an incredible privilege that speaks to our shared desire to build long term relationships and enduring partnerships.  We are slowly building up our knowledge of the contexts in which they work, deepening our understanding of the issues that drive their work, and growing our friendships. It is an amazing experience. 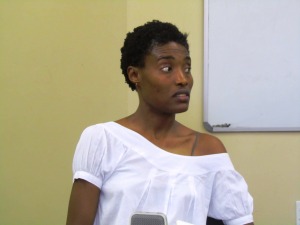 Yesterday (Sunday) we had a casual breakfast on the terrace with time to catch up, process and plan. Just being able to sit outdoors in the balmy air is a great relief and pleasure for me coming from a Maine winter. I feel hugely better and different in this climate.

Then it was off  to the Rosebank Mall which includes an African craft market and an enormous flea market as well as a typical mall. My approach is to survey the whole market and then decide where to shop. I remembered certain items or vendors I hope to re-find and sure enough we did.

Many of the craft stalls carry the same items and I am quickly overwhelmed by the plethora of merchandise on display. It becomes a blur that I must wade through to ‘see’ what I am looking for.  Looping back around i honed in on the colorful, leather-wound bracelets and beaded, ball necklaces I had hoped to find again. Cathy and I also found nifty cotton dresses that will be perfect for a variety of summer activities –so all in all a rewarding shopping adventure.

We returned to our favorite lunch joint, The Lucky Bean, for a leisurely lunch and more brainstorming about future consortium plans and projects.  And then it was off to The Old Stock Exchange downtown to experience Jay Pather’s “Qaphela Caesari” (translation Beware Caesar), a site-specific event that began on the second floor with a series of thin installations in abandoned, empty offices. Among the more interesting rooms was one with a series of empty suits hanging from the ceiling and two figures sprawled on the floor. In another room a secretary was shredding paper until it began devouring the space.

We then moved en masse to the trading room – a gigantic, mysterious space that resembled an odd sort of place of worship with stained glass windows and pews (stalls for the traders) and lots of strange equipment.  For the next hour and a half the performance unfolded in a series of shifting scenes around the space with a cast of 15 performers including an exotic dancer, a sangoma, and a Shakespearean actor. The audience was invited to shift their location and focus repeatedly as scenes moved from the main floor to the pews to the balconies where the trading boards were located. Video screens were mounted around the room with scenes from the child protests in Soweto among the footage. A dark, melodic and evocative score filled the space beautifully amplifying the action. There were big unison sections of very physical and virtuosic dancing by the full cast (on the dirty, concrete floor, which was distressing to me). Stretchy strips of fabric were employed throughout the work as metaphorical umbilical cords (or chains) binding the players together and to the story, and providing an effective architectural definition to the space. Extractions of text from Julius Caesar were sprinkled through the work as were elements of traditional ritual, exotic dancing, popular song (Barbra Streisand’s “The Way We Were” lip-synched by a drag queen) and more.

In the program notes Pather says “The themes of political betrayal, power and prophesy explored through image, dance and sound found resonance in The Old Stock Exchange. Like much of South Africa today it is a space of contradiction and fragmentation as much as one of coherence and possibility.”

The final scene brings the audience into the main foyer of the building, a space with lots of glass, external red elevators carrying passengers up an down, and a mile high ceiling. Here a rock band played loud music while people sipped wine and wondered what now???

Dance critic, Adrienne Sichel offered a smart and informative Q & A with choreographer, Pather at the conclusion.

Our night ended with a little nibble of mediocre sushi on 7th St before retiring for some much needed rest.

For a different perspective on our time here in Joburg check out Marj Neset’s blog at: http://mneset.wordpress.com/