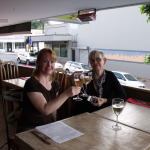 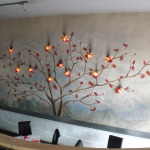 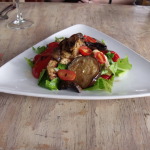 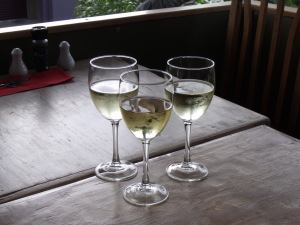 Sadly this is my last day in Joburg. I wish I could stay longer  to continue dialogue with members of the dance community. I have learned a lot during my short stay but there is so much more to know.  I regret having to miss the last two performances by Boyzie and Erik.

I attend the afternoon talk with Mamela Nyambza, Mcebesi Bhayi and Sbonakaliso Ndaba whose works will be performed this evening on a triple bill. It is an honor to get to know these artists through their own words and I am deeply moved by their intelligence and commitment. Mamela is an incredible striking woman with a passionate nature. A native of Capetown, she makes work about controversial issues and events. From the sounds of it pretty radical stuff.  She was trained in ballet, modern and jazz, spent a year at Ailey and performed in “The Lion King” before returning to Capetown to “do something interesting and different from her past.” She is currently working on a piece entitled “Shift” based on the real life killings of lesbian soccer players in South Africa. She has also been commissioned by the British Council to create a video installation for London’s City Hall to inaugurate an exhibition about racism in soccer.

Sbo is a strong, direct and totally down to earth individual who clearly knows what she is about. I like her immediately.  Also from Capetown, she has been making work a long while and has garnered many accolades. For Dance Umbrella she has create a piece on JazzArts, the premier company from Capetown. Sbo talks about her Zulu upbringing in a family of sangomas (traditional healers). She did not follow in her grandmother and mother’s footsteps and wonders if that decision will come back to haunt her someday. She works improvisational and draws on her background of traditional dance. She never plans a piece or starts with an idea but instead starts in the studio with  improvisational structures and watches what comes. She builds from there completely organically (my word). She sees this herwork in dance as a calling and something ‘deep.’

Mcebisi discusses his new work, “Umthi Ongathwaliyo” (Fruitless Tree) which deals with ritual, his reality as an African, and history.  Specifically, the piece deals with drought and death — people dying before their time and trying to return from the dead.  He describes collaborating with a Singaporean artist, with whom he had serious conflicts, and admitted that he was not willing to back down or change his vision for the work.

Later I attend a run of Mcebesi’s piece in the studio.   He dances in Gregory’s company and is working with the same group of five dancers. I love seeing work in the studio!  The piece is well crafted and shows good choreographic instincts. It is more sophisticated in this regard than some of the others works we have seen. I am sorry I cannot see it fully produced.

Again check out my colleague, Marjorie Neset’s blog (http://mneset.wordpress.com/) for another take on all these experiences. She got to stay two days longer so will comment on the final works being presented.

This afternoon I enjoy one last amazing meal at the Lucky Bean Restaurant on 7th St. in Melville with my traveling pals, Jodee and Marge. We take our special table on the upper balcony and order some of our favorite food and wine. We are inspired to preserve these moments of pleasure in photos lest we forget the awesome presentation and flavors.

I am sad to be leaving and am dreading the 17 hours flight home. I have one last drive through the city with our friendly driver, Gerry. As it turns out the flight isn’t as bad as I imagine. Its totally full but somehow I scrunch up and doze most of the night. The pilot announces after we take off that they are leaving all of our luggage in Joburg due to some weight imbalance. Two days later it still has not arrived…argh!

I return home feeling much more knowledgeable about the dance scene in South Africa but also understanding how incredible complex and layered the issues are around democracy, race, equality, integration, arts support, collaboration and building an authentic community. There are so many similarities to the U.S. Every country must trace its own path, and though they are often similar, real deep down learning only seems to come from experience. It sees tragic that we cannot learn by observing the pitfalls others succumb to. Our inability to learn from one another and make smarter progress may well prove fatal for our dear Mother Earth. Time is short … and a drastic change in direction better come soon or even art won’t  matter any longer.

When we as a race and planet face such dire issues it is hard to become too deeply distressed by the struggles of the dance world – the scarcity of resources for the arts and the lack of interest among the majority population.  Yet I do believe that the arts are the most compelling way to awaken people to feel and to act. The insightful work I have witnessed here digs into many crucial issues. If only more people would pay attention!  Certainly these artists are worthy of greater recognition and support. I am hopeful that Dance Umbrella will find a new sponsor and continue to thrive. Likewise, I hope that we will find support to introduce American audiences to more of these compelling voices of contemporary Africa. I have made a vow going forward to focus on the women artists of Africa and have already made invitations for 2011. Stay tuned!