The morning begins with a nice breakfast made by our incredible jolly and cheerful housemaid, Boingi.  From day one I felt like part of her family.  Then I try to write up our activities from yesterday before its lost.  While my colleagues have been racing around visiting the Apartheid Museum, the African Market, Soweto and Constitution Hall, I have done these things on prior trips so opt for quiet mornings of blogging.

It is my last full day and my pal Vincent, has called to invite me to lunch. I meet him at Sophiatown for a delicious meal of kingclip (fish), rice, squash, spinach and beer. I am delighted to have another visit with him and to continue catching up on our respective lives.  We make tentative plans for him to return to BDF to teach and perform in 2015.  Hopefully some of my US colleagues will want to present his new solos as well. 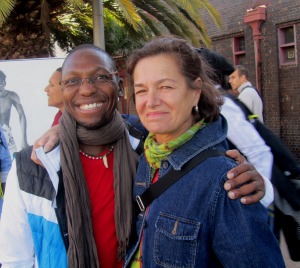 After lunch the first performance is Ali Karembe’s “Les Sorciers”. This young Mailian dancer is a formidable physical presence. I noticed him immediately when he showed up on the scene several days ago. A protégé of Kettly Noel (who was at BDF in 2011) this is Ali’s first group piece and it shows promise. What strikes me is his body intelligence and organic way of building movement.  We haven’t seen much of this. The three performers are giving us full body dancing. Much of what we have seen is not very strong technique and not much use of the lower extremities. Ali’s choreography also shows some maturity. He understands transitions (except for one bad one) and puts together a sequence of sections with a wrap at the end that I find satisfying.  Some bits could definitely be edited out but all in all it’s pretty good. 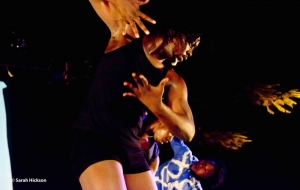 Then we’re off to Soweto once again for more performances and a big gala party for the festival sponsor, Total, as we learn driving out. First up in the little blue theater is Fana Tshabalala in “Gates of Hell I”. He is a mesmerizing performer who reminds me a bit of Vincent in his intensity.  Dressed in what looks like stocking material and elastic bands that barely cover his private parts, he offers up a searing and mysterious dance that no one sleeps through. 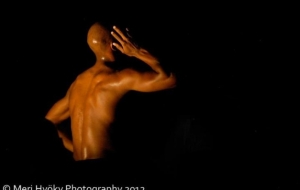 Fana in “Gates of Hell” 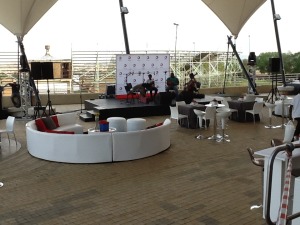 Fana was followed by two, long, uninteresting solos. Then came a quartet from Cameroon by Bertrand Marc Moda Yakana that opened with a beautiful and evocative scene — pools of light each illuminating one dancer with a piece of clothing hanging overhead.  These guys had a more developed movement vocabulary making use of the lower limbs. They employed good use of the stage and a movement thread of full body shaking that repeated through the work. Once again it went on too long.

After a pre-show cocktail hour out on the terrace as the 250 Total employees arrived we got to the main event, PJ Sabbagha’s “One Night Stand”. This was an interesting choice for the sponsor’s evening. I saw this piece in February at the more intimate Wits Theatre. While PJ had tidied it up a bit “One Night Stand” is still a wild, chaotic ride for twelve amazing dancers. This is the kind of full out, release based, upside down dancing we are quite familiar with in the states.  One of the two women is a sleek acrobat with phenomenal extension who gracefully flips around the stage to our astonishment. A small dancer with a Mohawk, Charlie, is a firecracker of a mover doing six pirouettes and flipping in and out of the floor at lightning speed. A dj spins the score in the corner and the dancers trash the stage with paper flowers and clothes that come off and on throughout the piece.  In one hilarious section a drag queen bemoans many unrequited loves, in another the boys try to woo the acrobat smothering her with flowers. Many scenes unfold and fold into one another in this highly entertaining work. I can’t help but wonder what the Total folks thought. 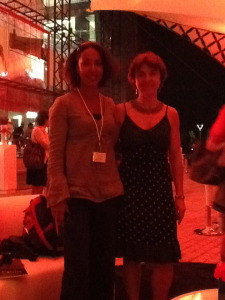 Helen & Annie at the gala

The party continued after the show with a live string quartet and plenty of drinks and finger food. As we were pretty tired we managed to convince, Richard, our driver to take us home. With 14 people stuffed into the transpor,t including a rather drunk Boris, we made our way back to Melville taking the long way so folks could see the “calabash” stadium in Soccer City built for the World Cup in 2010. It is the sight of a big rugby game tomorrow between the world’s two best teams, South Africa and New Zealand. They are expecting 90,000 people.   Would that dance attracted even a fraction of that crowd!