Little did I think I would be back in Jozi within months of my last visit. But the French Institute of Culture elected to host their biennial African dance platform here this fall and as a partner in The Africa Contemporary Arts Consortium I had to come  see what great new (and known) artists and works were being presented.

After a torturous 30 hours of travel I arrived back in what is becoming a known and loved place, Jozi (as Johannesburg is affectionately called by its inhabitants). Fortunately I arrived in the evening and could go directly to bed. Sadly I missed the opening night which featured new works by BDF alum, Lucky Kele, as well as Fatou Cisse, Via Katlehong Dance and Delavallet Bidiefono who I really wanted to see. 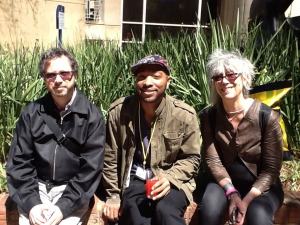 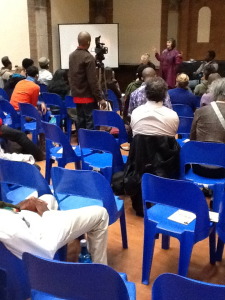 called “The Ar(t)chive, Dancing the Archive,  the second day of a dialogue with artists and scholars about the importance of documentation and archiving for future generations. I was sad to have missed the first day of this convening which featured the two grand dames of contemporary African dance, Germaine Acogny and Sylvia Glasser. These two remarkable women, along with dance writer, Adrienne Sichel, have championed the development of contemporary dance on the continent, and in South Africa, in particular, serving in the trenches as they say for decades.

The dialogue quickly brought to light the challenging reality that not enough performances takes place, for lack of funding and venues, to allow audience or writers access to work on which to understand and comment on the “field”. Artists for their part cannot afford the time or space to develop their archive as the imperative must be to devote what scant resources they have to creating art.

A heated discussion ensued about the importance/necessity of archiving the work of  this burgeoning field of contemporary dance. Faustin Linyekula argued that preservation is not important —  all that matters is what happens in the moment that can lives on in the memories of those lucky enough to witness the performances or workshops.  He declared that it was presumptuous to archive assuming it might be of value to someone in the future. Others, including myself, argued it is for those future souls to determine the value and that they deserve the opportunity to access what has come before in order to better understand the context and history of the work and interpret the present. 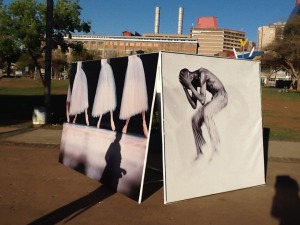 The afternoon bled into the evening with no less than four performances in quick succession –thus is festival land! But first we had time to wander among the outdoor exhibit of photos by Antoine Tempe while simultaneously  watching a site performance by Fana Tshabalala. Following this sunny respite we returned to the theater to see Radhoune El Meddeb’s (Tunisia) long, dark, slow moving quintet of three couples attempting to engage, engaging and disentegrating. My favorite part was one dancer creating the sound score for another’s solo by walking on and scuffing sand spread on the floor. 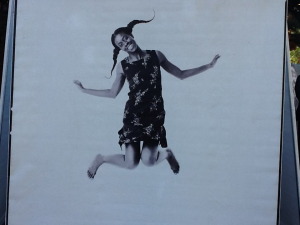 Next up a long, duet by Fanny Roselyne Mabondzo Ngamba with lots of  plastic bags that could have used some serious editing and shaping.

Then the marvelous “Inkomati (Dis)cord” by Boyzie Cekwana and Panaibra Gabriel, a quartet inspired by the non-aggression pact between Mozambique and South Africa. These two mature artists spent four years collaborating in fits and starts, two weeks here, two weeks there with long gaps in-between, to finally premiere this boisterous, humorous and engaging work about a serious political subject.

The final performance I managed to sit through with heavy eyelids was “Sueur Des Ombres” by Andreya Ouamba in which three warring couples whose duets were defined by bamboo bars that were constantly re-arranged to change the stage space. Exhausted we retired for much needed rest.