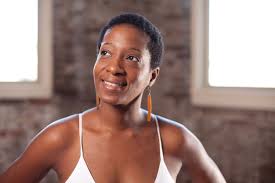 Tania Isaac is a former Pew Fellow and McDowell fellow; a choreographer, dancer, writer who has led international performances while creating models for thoughtful, audience-centered engagement. During that time, she also presented papers, publications and projects on creative process in the arts and its potential applications across multiple fields.  A self-described kinesiophile and lover of information—both physical and verbal—she is a dancer because she loves language; a choreographer because she love conversations and an artist because she never run out of questions. She is unrelentingly curious, and her published writing explores the spectrum of contemporary dance ranging from essays/commentary to comparative literary esthetics in performance. In addition to numerous independent projects, Tania has been a member of David Dorfman Dance, Rennie Harris Puremovement, Urban Bushwomen and a collaborator with Emily Johnson/Catalyst. Her company, TaniaIsaacDance has been supported by the Pew Center for Arts & Heritage, The National Performance Network, and The Independence Foundation & Bates Dance Festival, among others. In addition, her “Living Notebook” – a way of turning a room into a laboratory of investigation and participation in multiple forms- initially developed during a 2006 residency at the Maggie Allesse national Center for Choreography and continues to be an essential element of her creative work. She is a former MANCC Fellow, Pew Fellow and MacDowell Fellow. Tania holds a Bachelor of Science -Dance from UW-Madison, an MFA from Temple University and is currently completing an MPA from University of Pennsylvania’s Fels Institute for Government.