The Bates Dance Festival cultivates an environment fostering creativity and nurturing collaborative relationships that span the duration of the festival and beyond; thirty-five years to be exact. Part of this cultivation is achieved through the eclectic and poignant performances that make up the festival, inviting artists from all over the world to come perform at the Schaeffer Theatre, letting the spirit of BDF support the work. DanceNOW premieres Friday, July 7, featuring work by Lida Winfield, Betsy Miller and Matthew Cumbie, kicking off the festival with humility, humanity, and a bit of whimsy. 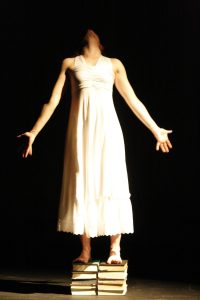 Lida Winfield’s work, “In Search of Air,” has been performed across the U.S. over the past six years. This improvisational solo work falls within a tight structure with a set text, but still feels very much alive and malleable, as it shifts slightly with each performance, keeping the audience and Winfield curious and engaged. An embodied account of Winfield’s experience with dyslexia, “In Search of Air” recounts her journey and struggle, questioning and laying out how it happened that she did not learn to read until she was an adult. This work is a stark window into the educational system, a look at shame, and a heart-wrenching picture of humanity.

An artist and educator based out of Vermont, Winfield is a storyteller who uses words, movement, and performance. Throughout her creative process in relation to this work, she realized she could craft stories in her head without paper, saying them out loud in the woods, the shower, and the car, places she could talk out loud without feeling crazy. The stories were cemented in pacing, tone, volume, and emotion, and with each word, evocative movement ideas and qualities became apparent. The result is “In Search of Air,” a story that establishes dance as a lifeline, colored through the voice and body of a powerful artist; a vulnerable act not to be missed.

Following intermission, Betsy Miller and Matthew Cumbie take on whimsy in their duet, “The (still perfectly fine) Adventures of Unicorn Hair and Dragon Heartstring”. Miller, BDF’s current box office associate and house manager, has been a member of the BDF family for almost twelve years, and Cumbie, for five. Five years ago, the two came together to embark on their first process; which began here at the festival. It felt like the beginning, and in 2016, the two had the opportunity to return to the process to create this new work, building upon what was started five years ago at the Bates Dance Festival. Now, at very different points in their lives, they are returning; returning to a process and a relationship with a strong and enlivened residue that is still very much alive in their bodies and memories. The dichotomy of the two – the present and the memory – are put together in this duet, resulting in a lively investigation of their relationship, their selves, and how they interact with the world around them. 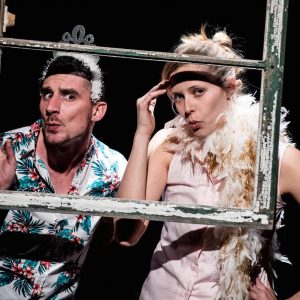 The whimsy of this duet lives in the performance, the props, and the artists, a performance reminiscent of the process. Wildly playful, Miller and Cumbie give themselves permission to be their most authentic selves, a rare practice which, in this case, is integral. The act of making is central to the work: the histories, the eccentricities, the returning. Returning to their childhoods, their relationship, and the place where it all began. The piece comes to life inside this. The “what if’s” which often live only in the studio, are part of the performative score, creating an experience rooted in fantasy and openness for performers and audiences alike. “The (still perfectly fine) Adventures of Unicorn Hair and Dragon Heartstring” conquers and cultivates ideals of openness and vulnerability, establishing standards of how we all should strive to exist in this world: together, with a touch of whimsy.

This performance is not to be missed, a gathering of artists vulnerably presenting original, complex, and imaginative work. This program runs only on Friday, July 7, at 7:30pm in the Schaeffer Theater, and promises to delight, entertain, and remind audiences of the reality of humanity and the art of existing in this world. We kick off our 2017 Performance Season with Lida Winfield, Betsy Miller, and Matthew Cumbie. We welcome you into this world.

This post was written by Phoebe Ballard. Phoebe is the social media intern for the 2017 summer.