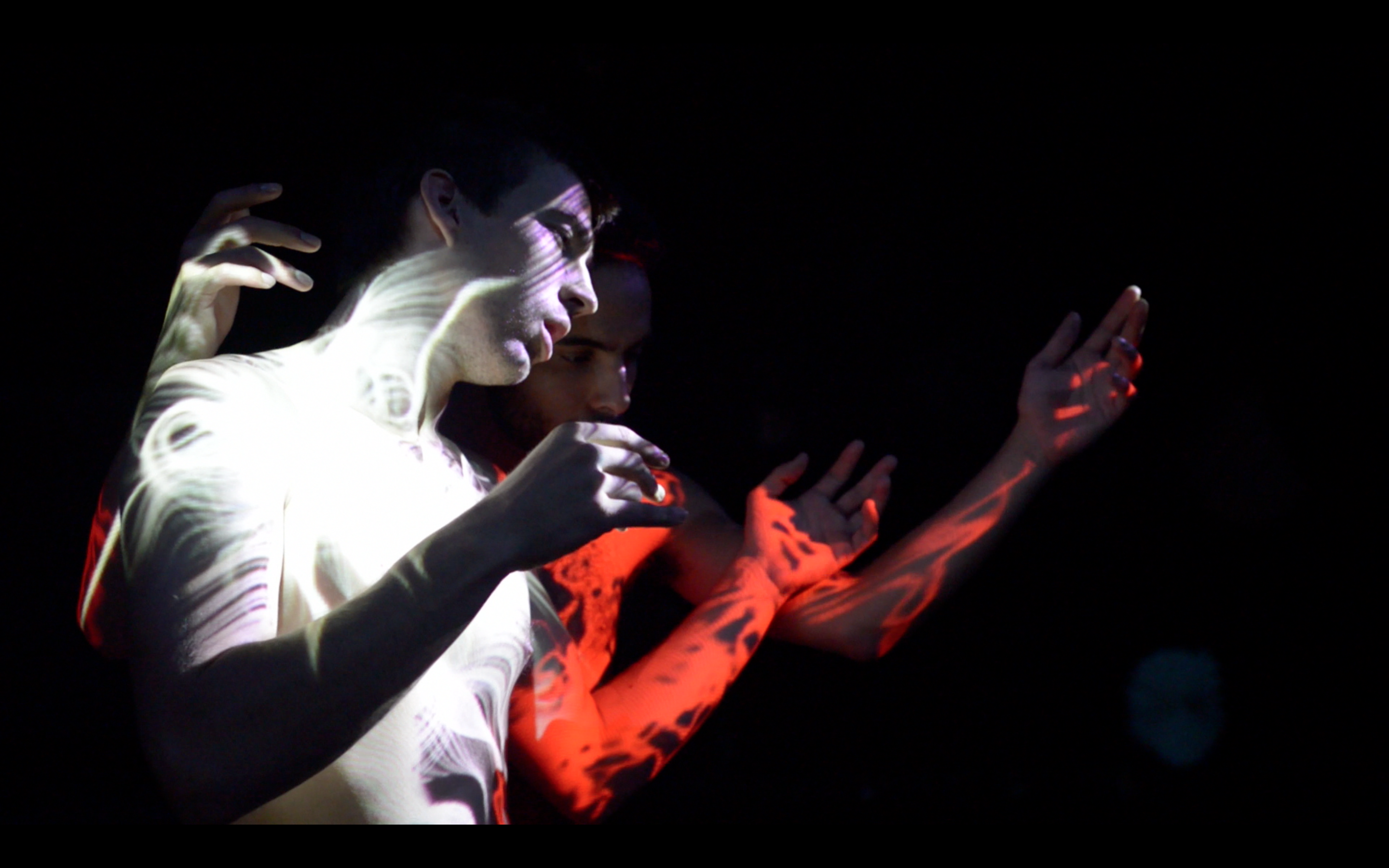 Scotty: We’ve begun to find a flow with the piece now, where a lot of the technological elements we’re working with in the Blackbox are aligning in a way that’s starting to facilitate a tone, a mood, and everything’s starting to synthesize with the bodies in space. There are a lot of moving parts in this installation: four projectors, two computers, a soundscore, two bodies in space being tracked by two Kinect cameras… there’s just a lot.

Keanu: And also the ideas we’re working with in the movement are fairly complex as well – this deep kind of vessel breathing that creates this strange kind of slow improvisational vocabulary, and an ongoing awareness of touch between us, a lot of sensation. And underneath all of that is this focus on the digestive tract, the complete tract from end to end – there’s really a lot of complex movement ideas going into this process.

Scotty: Absolutely! But those are also in a way really basic ideas, right? Like, there’s nothing more simple than the respiratory system and the alimentary canal, right? Which are  systems that informed the digital projection designs. So, here’s the thing, people are always like “oh, you know, tech, artwork and digital arts, it’s so new wave, alternative, and cutting edge… but I always feel when I do this kind of work like I’m grappling with the primal forces of nature. Things like light, eclipse, shadow, statistical formulas that mirror patterns found in nature, the subtle systems of our world broken down into numbers, and these cyber elements actually help to reveal something more primal than I can feel when I’m dancing in the studio. And when those two things come together, it’s like a cyber primal.

Scotty: I don’t know how else to describe it.

Keanu: Yeah, I have no words — I’m still digesting what just happened in there. It’s amazing the conversation that the technology and the movement have together; what combining those two things unlocks and where it will take you. It’s the lighting design, there’s something about how the light reveals the body, or the body reveals the light. And having the light reveal the body and erase the body, and in the darkness the body reconfigures and has found a new shape, and the light has found a new random direction – it’s like, what is happening!

Scotty: It’s weird, it’s like a responsive light source with the Kinect cameras — they are tracking our movement, and responding to our movement using infrared sensors, which then is translated by the software in the computer and projected back onto our body, revealing our bodies, which then inform the light; it’s all very cyclical. It’s phototropic. And what’s interesting about that is that you feel that kind of primitive texture, a primal texture of light and growth response. 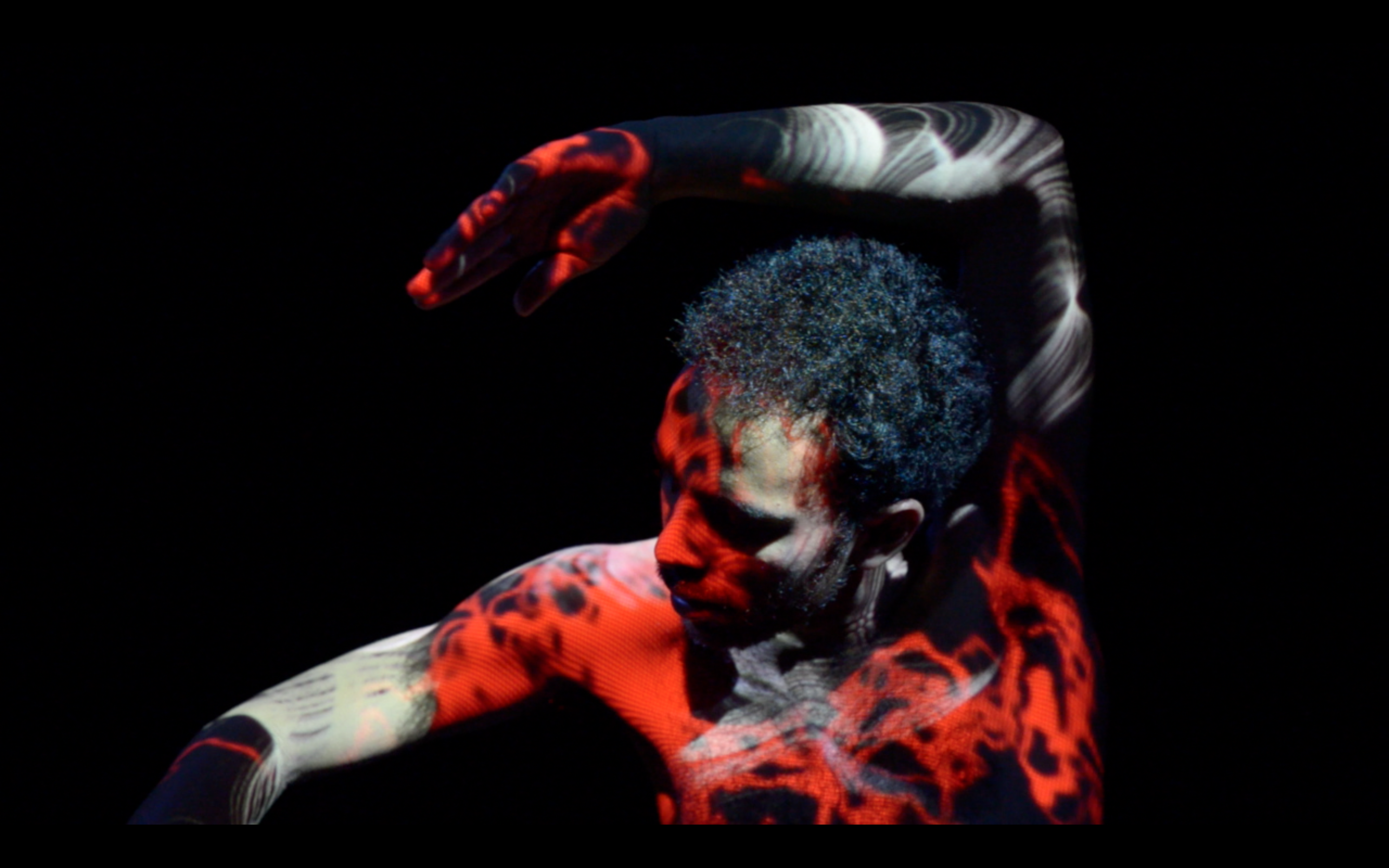 Keanu: It informs the movement, I feel like I’m no longer being inside of it trying to situate this thing, but I’ve found the place in which there’s no more thought, it’s not run by the brain, or just by the body, or just by our relationship to the light, but all of those things tied together to become a cohesive whole.

Scotty: That’s why I say, whenever I’m building a new piece I feel like I’m building a Zen garden – in this case it’s a highly corrupted garden. It’s very cracked and imperfect in the design of the projections, that sort of coral shape which is the white, and the blood vessel design in red. I feel like through the projections that we create with the movement I’m seeing synapses, and internal processes of the body made external, and that those internal processes of the body are being made external in a way that reveals the body. In that way it’s kind of an inside out feeling and it’s very… weird… I don’t know how to describe it really.

Scotty: Haha, yeah, it’s tapping into something… we just had a very rich rehearsal by the way, we reoriented the projections. Again. And it’s going much better now, everything is falling into place, and now all four of the projectors are aimed in the same location on our bodies where the duet is happening. What we’re working on now is the movement vocabulary and how this duet is taking shape within this swirling world of light designs painting our bodies, and how that’s going to translate with two bodies together instead of one. 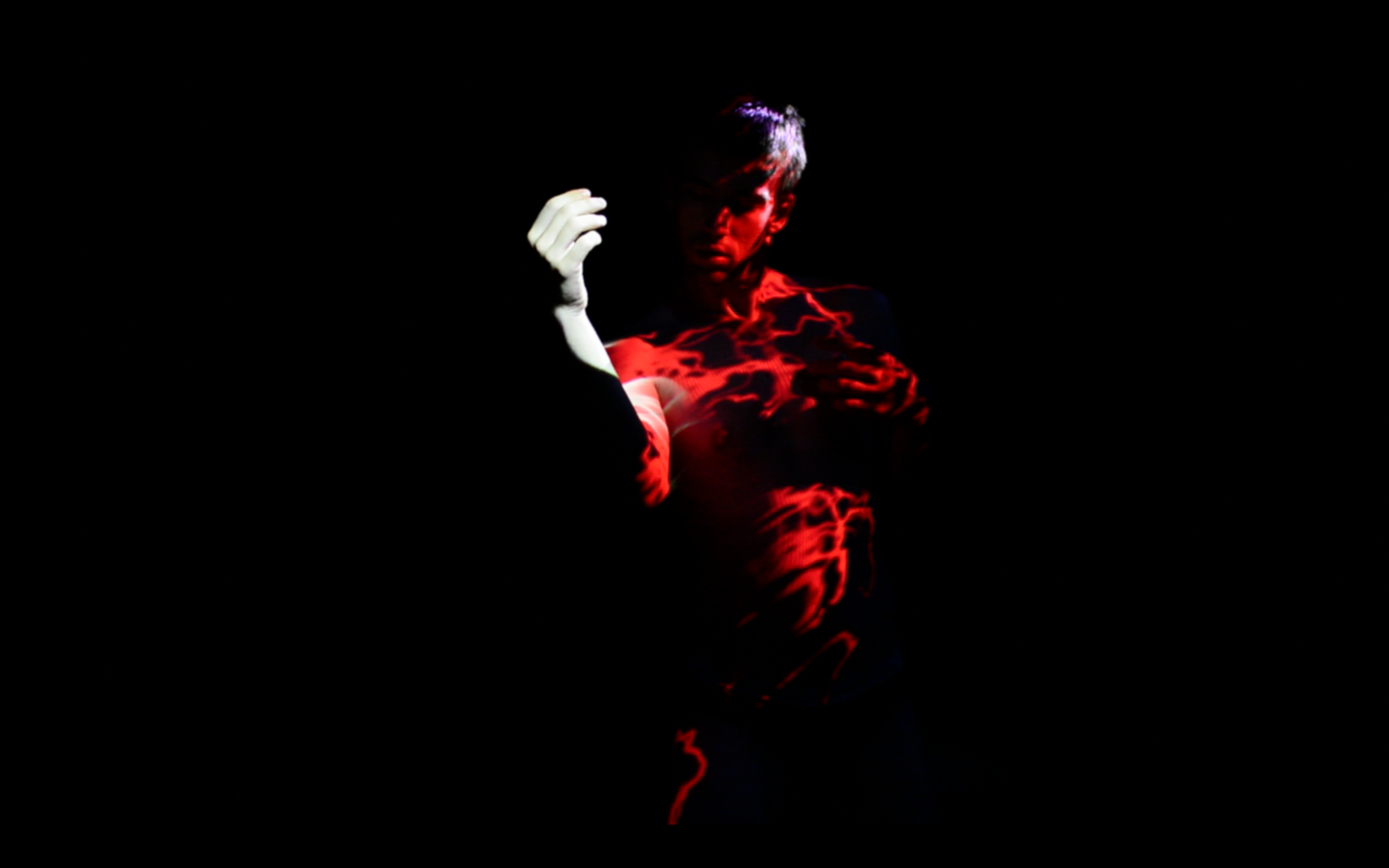 Keanu: But that’s all in the improvisation of it – we work, and test, and experiment, see what’s feeling right and what isn’t feeling right, and how we’re both constantly reacting to one another and to the space around us. It’s like life in a way.

Scotty: Definitely, and as we go into this week of shows for the Different Voices concert and for the Bates Dance Festival community, we’ll have to try to maintain that sensitive space where the whole organism is still in a state of organic experimentation — it’s a hard thing to maintain going into performance.

Scotty: Yep, and in the meanwhile, folks can check out the promo video which will be online soon up on Vimeo! Stay posted!

Check out the promo video here.